I had never thought of making bacon any other way than pan frying it, (microwaving throws the texture off) until we went to visit friends and they made bacon one morning in the oven.  It was so easy, and so much cleaner than having to worry about grease splatters- which itself was enough for me to try this technique.  It’s also much quicker to make in bulk, and since last weekend I had my family over for brunch, which includes a husband, 3 brothers, and dad, all six-foot tall and above, I needed to make a LOT!

Be sure when shopping to get ‘uncured’ so it isn’t loaded with harmful preservatives.

Put down foil on your pan, make sure it is a pan with a lip so grease doesn’t spill into your oven. I scrunched the foil a bit to give the grease somewhere to drain. 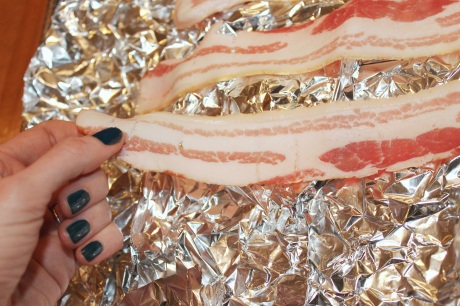 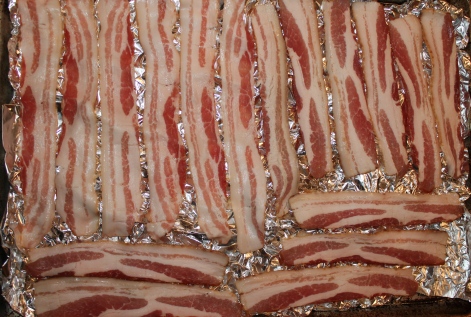 Spread on baking sheet and bake at 400 degrees for 15-25 minutes. (I left mine in for almost half an hour because it was sliced thick and I like my bacon crispy.)